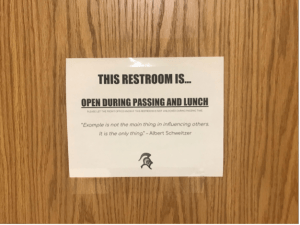 There are lines leading outside the girl’s bathroom, signs on bathroom doors saying “8 out of 10 high school students don’t vape”, and concerned parents emailing administrators.

Ever since vaping became popular among high school students, more and more public schools across the nation are trying to fight back by regulating access to some of their own bathroom doors. Recently Farmington High School (FHS) has adopted this policy for enrolled students in an attempt to stop students from vaping which, more often than not, has the addictive chemical nicotine to give users a buzz.

When I asked the principle of FHS, Dr. Jamie LaMonds, what the cause is behind these new bathroom regulations she had this to say; “Well they’re not on lockdown during passing time, never have been. Now there have been some issues like one time we had a maintenance issue and we locked a restroom during passing time. But, actually starting last year, we starting seeing more and more vandalism issues in our restrooms. Just bizzare stuff like; breaking handles off, breaking faucets off, ripping doors off. Just really stuff I’ve never seen before. I’ve been here 21 years and it was just really unusual. So we tried to monitor that a bit more, had to watch a lot of videos to retrace our steps and as you know we have 1,200 students, a very large kind of complex building so supervision kind of becomes an issue. During passing time it’s not as hard because we have more teachers to do it but during class time everyone’s in class, doing what they do. So then this year, for the first time, we had some vaping issues last year but this year it has been off the charts. It has just been a huge issue campus wide. It’s happened at sporting events, it’s happened in classrooms, it’s happened in our hallways, it’s happened in our restrooms, and it’s just become a real issue and restrooms is the most common place where that happens. So we need to supervise more heavily, because it’s our responsibility to keep the non-vapers safe too, right? It’s not just about the people doing what they’re not supposed to do.”

How dangerous is vaping exactly though? Although scientists and health experts are still studying the effects of long-term vaping, there are dangers already identified with vaping. Nicotine is in almost all vape juice and can cause addictions. According to the CDC (Center for Disease Control) “Most e-cigarettes contain nicotine. Nicotine is highly addictive and can harm adolescent brain development, which continues into the early to mid-20s.”

Dr. LaMonds states that “This is a temporary solution” and that she plans to outsource to parents and students for new ideas on how to combat this issue. Even though she plans on talking to student leaders and parents, she wants the student body as a whole to be a united front against this possible future danger. Dr. LaMonds states; “This is your school, you need to stand up for your school and you need to own it and that needs to be the culture we have in our building and we’ve seen a culture shift this year. We have a lot of leadership groups and a lot of students taking more ownership in their building.”

During our interview, Dr. LaMonds mentioned a story about an actor from the 50’s and 60’s named Yul Brynner. He was a Soviet-American who, due to smoking, contracted lung cancer. During the time period nobody was outspoken or even aware about the dangers of smoking. So what Brynner did was wait until he was literally on death’s door and when we was, he made a national public service announcement, showing America the horrors that may befall them if they continue smoking. It is possible that our generation might end up in a similar boat.

Dr. LaMonds made it clear through our interview that her and the school administration’s intention is not tyranny, but to educate and protect the students of FHS. The responsibility falls on us, the students, to create new and modern solutions to this issue. She had this to say as a message to students and their parents; “Please understand that everything we do in this building is always meant to help the greater good. We’re not doing anything intentionally to make students feel like they don’t belong here and that we don’t want them to feel unhappy here. I think we all need to make sure we keep an open line of communication and be very real about the problems we face”.